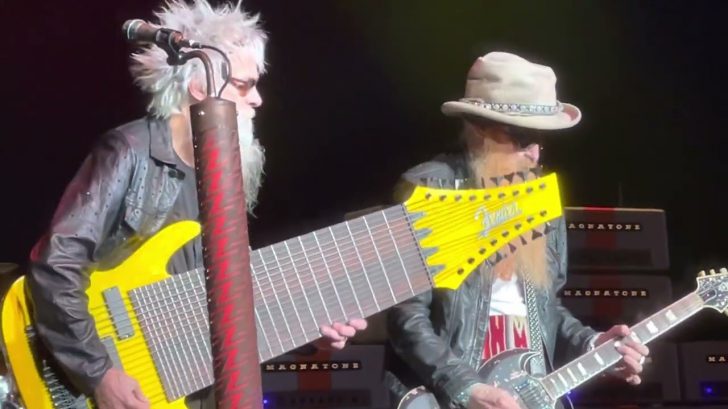 The enormous equipment wasn’t merely a set piece. In the fan-shot video (see below), the bassist can be seen strumming along on the absurdly oversized gadget, to the pleasure of vocalist Billy Gibbons, during ZZ Top’s opening song of the night, the 1983 Eliminator song “Got Me Under Pressure,” demonstrating that it could indeed be played.

Francis switched to a more conventional bass for the remainder of the performance, although no justification was initially offered for the enormous instrument.

In fact, the giant bass was the consequence of some late-night computer browsing, as it turned out. Yes, much like the typical person ends up purchasing odd toys and gizmos on Amazon, ZZ Top found their newest instrument in the same manner.

After the passing of bassist Dusty Hill, Francis was the final member of ZZ Top to join. The musician, who had been the trio’s longstanding guitar tech, has now slotted in perfectly with the other members of the trio.

The Raw Whiskey tour by ZZ Top is coming to an end on December 2 in Scottsdale, Arizona. For a residency at The Venetian Resort and Casino, the group then travels to Las Vegas. There is no information on whether the 17-string bass will make another appearance.