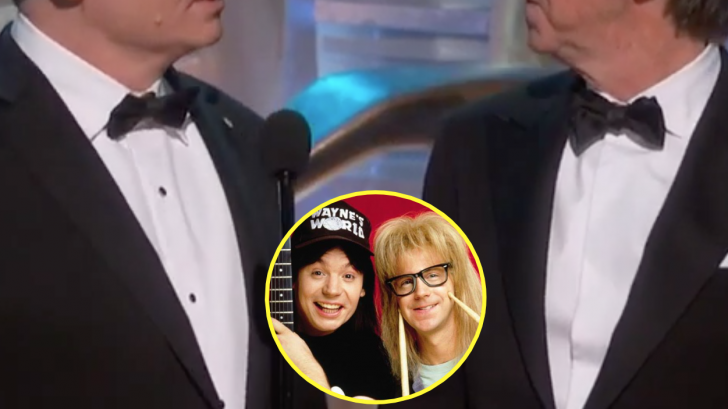 Last night was truly a good one to be a Queen fan. Bohemian Rhapsody took home four Oscars and Rami Malek proved to be the evening’s favorite leading man, scoring the coveted Oscar for Best Actor at last night’s Academy Awards. However, the real winners were Saturday Night Live fans who tuned in to see a surprise Wayne’s World reunion between Mike Myers and Dana Carvey, who famously starred as Wayne Campbell and his trusty sidekick Garth Algar.

Myers, 55, and Carvey, 63, were in attendance to introduce the award for Best Picture which ended up going to The Green Book, but it’s okay – we got a fun little exchange between Mike and Dana – err, Wayne and Garth – that more than made up for it.

Carvey dropped some serious nostalgia when as Garth Algar he warned that he threatened to hurl – to which Myers replied as Wayne Campbell, “Don’t hurl cause if you honk I’ll spew.” Without skipping a beat, Carvey promised “And if you spew I’ll blow chunks, so I shall not hurl,” much to the delight of the audience decked out in their Oscar night finest.

Y’all, if this isn’t a blast from the past that we didn’t know we needed, we don’t know what is! And don’t Mike and Dana look incredible?! Check out this incredible moment in the video below!