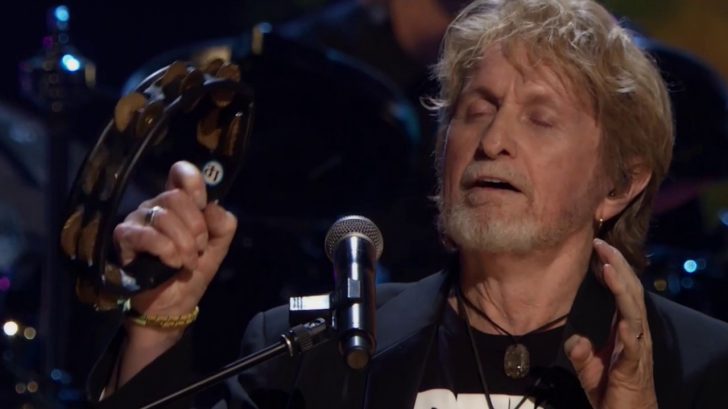 Individual projects differ even more dramatically – if you listen to everything in chronological sequence, you may hear a wild free jazz album (like some of Bill Bruford’s improvisations with Dutch pianist Michiel Borstlap) next to a new-age atmosphere evocative of a massage shop lobby (Jon Anderson). Given the stylistic variety, evaluating them all is difficult, which is exacerbated by the sheer amount. The great majority of these people were incredibly productive both at Yes and after they left.

Levin and Torn reunited for this fiery one-off, but with a different Yes drummer, and accurately described it as a “collaborative beat down of original progressive instrumentals.” At times, the tracks resemble an even wilder King Crimson (“No Warning Lights”), pushing White to an intensity he hadn’t approached since the Relayer days.

The drummer and keyboardist, as usual, alternate between chaos and tranquillity, freedom and form. They also create some appealing tumult along the road, such as the synth-sax electro-jazz of “From the Source, We Tumble Headlong” and the vintage fusion-funk groove of “Flirt.”

One of Howe’s most diverse albums, with one of his most versatile lineups (featuring Levin on bass, Dylan on drums, and Oliver Wakeman on keys). Spectrum feels like a “best of” collection from the guitarist’s post-’70s years, with sweetly jazzy riffs (“Tigers Den,” “Ultra Definition”), spacey twang (“Ebb and Flow”), and even zestful sitar rock (“Tigers Den,” “Ultra Definition”) (“Ragga of Our Times”). Despite the fact that you’ve heard it all before, the record’s modest charms win you over.

Jon and Vangelis make up for the incoherence of their first album on their second, establishing a more equal difference between art and pop, between the former’s wide-eyed coo and the latter’s skyscraper keys. There are a handful of dull ballads (“Beside”), but they are balanced out by the dark majesty of “The Mayflower” and the 12-minute title epic.

Pure rock lovers may find these experimental duo improvs, which range from classical piano melodies to bubbling electronics and spooky recorded voices, difficult to enjoy. The appropriate type of Bruford fan, on the other hand, will appreciate every second of the craziness, notably the Latin-tinged assault of “Two Left Shoes.”

Bruford assembles an experimental quintet lineup for the first and greatest Earthworks LP (including keyboardist Dave Stewart, a former collaborator in the Bruford band). Their arsenal of instruments — various keys, acoustic and electronic drums, sampling, percussion, various horns and saxes — allows the band to straddle jazz, experimental rock, and uncharted territory: “Making a Song and Dance” lays out an African groove before abruptly twisting into harsh synths; meanwhile, “My Heart Declares a Holiday” opens with a marimba-like keyboard pattern that could have been piped in from early 1980s

The band, including an occasional horn section, is caught with straightforward, unfussy production; the tunes play to Howe’s strengths as an arranger and performer; and he even sings with robustness (folk-rocker “Where I Belong”). The opener, “Across the Cobblestone,” features one of the guitarist’s hardest riffs in decades, and he experiments with dark guitar textures toward the conclusion (“Sand Devil”); nonetheless, the best tune, “Westwinds,” leans toward big-band jazz.

Wakeman recorded Criminal Record shortly after reconnecting with Yes on Going for the One, and the two projects have a distinct sound connection. The proggy, no-skips first side has Squire and White’s rhyhm section, which backs up Wakeman’s various keys. (In a head-to-head contest, both “Statue of Justice” and “Chamber of Horrors” might rival with any Yes song from the era.) The solo keyboard work is less memorable, but Wakeman caps it all off with the choir-backed 12-minute epic “Judas Iscariot.”

Banks’ debut solo album is a near-classic that almost matches the sum of its high parts. (Focus guitarist Jan Akkerman appears on six of the album’s nine songs; other guests include Phil Collins on drums, Steve Hackett on guitar, and John Wetton on bass.) Despite the prog firepower, Two Sides is often tranquil and low-key, favoring tight jamming (“Knights”) and balanced grooves (“Battles”).

Howe is unconcerned with vocal hooks or typical rock production when performing jazz-fusion. And his Trio’s second album, New Frontier, is the ultimate showcase for his playing in this vein: they can become downright funky (“Left to Chance”), throw about dreamy melodies (“Hiatus”), and even flirt with prog (“Gilded Splinter”).

On his second solo album, Howe sings lead for about a minute. For one minute, the outrageously out-of-tune folk belting at the end of “All’s a Choir” is impossible to listen. Thankfully, he passes the buck to others, whether it’s singer Claire Hamill (whose moving rendition concludes the overlooked prog classic “Look Over Your Shoulder”), his arsenal of riffs, or the symphony orchestra and string group on Side Two.

It’s the crown gem of Anderson’s solo collection, owing to the fact that it sounds the most like a Yes album. (Prog fans will hear echoes of Relayer, Tales From Topographic Oceans, and Going for the One, as well as some influence from future collaborator Vangelis.) However, the artist’s first solo project, a concept album about the migration of four alien tribes, goes beyond his mothership band by exploring music from other cultures, allowing him to incorporate sitar, bouzouki, saz, tabla, Irish harp, African flutes, and other unexpected instruments.

This is more to my liking. Using the same talented lineup as his debut, Bruford generally foregoes vocals (apart from a few of amusing guest appearances), making more room for his band’s elegant prog-fusion (“Hell’s Bells,” “Five G”).

The Six Wives of Henry VIII, maybe Wakeman’s most traditional prog moment, feels like a long-lost Yes LP, with appearances from Bruford, White, Squire, and Howe. It checks all the boxes: warm analog recording, no clumsy pop efforts, no lyrics to detract from the full smorgasbord of vintage keyboards (Hammonds, ARPs, Moogs, Mellotrons). Try “Catherine of Aragon,” which alternates between Fragile-style bombast and Pink Floyd-style choral grandeur.

Squire’s debut solo album not only sounds like an alternate-universe Yes record, but it’s also better than most of them in the real chronology. First and foremost, what a supporting cast: Bruford, King Crimson saxophonist Mel Collins, Canterbury Scene flute king Jimmy Hastings, and complete string and brass sections. Then there’s Squire: confidently singing, freely writing, and playing some of his finest bass lines. Fish Out of Water is the definitive Yes solo album, featuring symphonic-scale prog epics (“Silently Falling,” the 15-minute “Safe [Canon Song]”) as well as beautifully orchestrated art-pop (“Hold Out Your Hand”). This is a real classic.