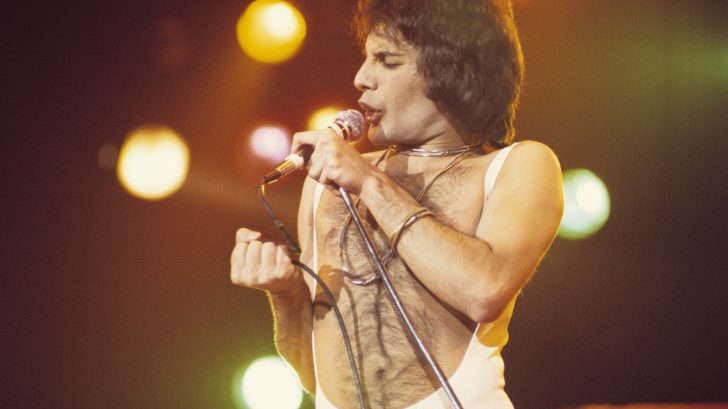 Freddie Mercury of Queen, performing at the Omni. (Photo by Tom Hill/WireImage)

It is tremendously difficult to choose between all the songs of the British band, but we believe that these are the most representative of Freddie Mercury & Co for art, heart and transcendence.

Queen is one of the most iconic English bands in history, that’s for sure. Their lyrics and musical compositions, as well as the extraordinary personality of their vocalist, Freddie Mercury, have made this group one of the greatest references in British rock. So much so that 50 years later, their magic endures and will last forever, because we can still be moved just by listening to them. We Rank The Best Songs From Each Queen Album:

It was the only Queen single that never made the charts, but it was quite a declaration of intent. May’s guitar predominates in it and served to inaugurate the band’s fan phenomenon in Japan. Rock in its purest form with which Freddie and his boys seemed to say: “we are here.”

A song composed at the time of Smile, which Queen performed few times live, but in what way when they did it… Mercury’s voice in celestial mode and the intensity of the composition in crescendo, bordering on the epic in the final section, as strong points.

It was the band’s first big hit, earning it number 2 on the UK Singles Charts. The band patented the Queen sound with a joy of resources and Freddie began to show himself seriously… For me, without discussion, the best song on the album.

Obviously, this does not have a reason to be included in here. Magnus Opus by Freddie Mercury, immeasurable. A masterpiece that remained number one for nine consecutive weeks in the UK. Probably the best song of all time. Little more to add.

One of Mercury’s favorite songs, with which he raised the level of difficulty in vocal performance a notch. A mixture of rock and gospel, it leaves for posterity a final anthological falsetto and a chorus of voices of three that emulate a hundred. Another jewel in the crown.

In a tough fight with another hit from the album (We Will Rock You), Mercury’s triumphant ballad is, and will be, the soundtrack par excellence of sporting hits. Another demonstration of Freddie’s vocal power that has the almost magical ability to perfectly blend in with the emotions that result after having achieved a triumph. No matter how many times you’ve heard it, it always shudders. Queen in its purest form.

It reached number 9 on the British charts and 86 in the United States, although, as with most of the band’s material, its appreciation and popular acceptance have grown exponentially over the years. A study concluded in 2015 that it is the song that makes us feel the best. Almost nothing…

Very difficult choice between this huge funk hit (7 million copies sold; the band’s second number one in the US) and the magnificent Play The Game and Save Me. This time Deacon’s tremendous bass wins the game. It supposed a certain change of register for the band, but it hooks anyway from the first second. Give it volume.

On this eminently instrumental soundtrack, the film’s title track reached # 10 on the UK charts. The live performance, very convincing. Of course, The Kiss (Aura resurrects Flash), instrumental in nature, takes us to another level (film music with all the lyrics).

The record change was confirmed and the fiasco for Queen with this album. However, it picked up another of the great successes of the band. There is little doubt that it is the best song on the album. Legendary collaboration with David Bowie in which John’s bass stands out again. Another indisputable number one for the band.

The album supposed Queen’s reunion with her own essence and, among several great songs, this legendary song stands out for us. With an iconic video clip from the 80s, in which Freddie, Roger, John and Brian appear dressed as women parodying the British soap opera Coronation Street, the composition became an anthem of liberation around the world. It reached number 3 on the UK charts and number one in other countries.

This was a tremendous album that collects several hits from the band, although A Kind Of Magic was close to pop than rock, it also reached number 3 on the UK charts.

Very difficult to decide with the band’s thirteenth album (not in vain it included several songs that would later become the Greatest Hits II). The balance was in favor of Scandal for being a song that lacks nothing: pop-rock with a forceful percussion, permanent presence of May’s guitar and, above all, a Mercury voice that touches the inhuman in the final stretch.

The final message of the genius. A true sonic testament that makes your hair stand on end. Intense, solemn and epic in equal measure, it is awe-inspiring at the prospect of the short future that awaited Mercury when he recorded it. Essential.

Written for the album The Miracle, this excellent ballad appeared on the album posthumously. Emotional song that becomes saddening, once again demonstrates Freddie’s vocal quality. Perfect from start to finish.