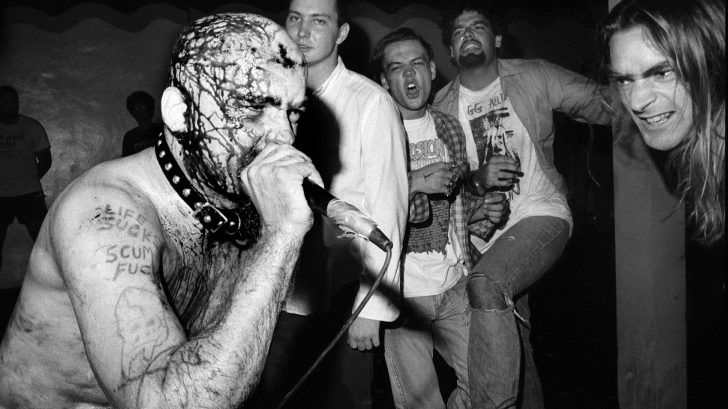 One Of A Kind Weirdness!

Perhaps one of the most ultimate symbols of rock n’ roll rebellion, taking it to the extreme that no one is capable of doing what he does.  Dangerous, lunatic, violent, unconventional, and always attempting to shock everyone by self-mutilation and often harming his audiences  (post-“Jackass” world). A total anti-authoritarian, he defies the law. This infamous punk aggressive music icon was arrested over 52 times on multiple accounts, substance abuse, sexual conduct, indecent exposure, and violence. He is referred to as “the most spectacular degenerate in rock & roll history”.

“I think GG either had schizophrenia or bipolar or some actual undiagnosed condition because Merle is actually really normal – you can have a real conversation with him, he’s very business-minded and concerned about money and the band getting paid and scheduling the tours. GG, I just think there was a disconnect there from when he was really young. I don’t know what it was. I think the alcohol exacerbated it but it was self-medicating to some extent but in a weird way. I think it backfired a lot of times.” -Todd Phillips

He was born as Jesus Christ Allin in Lancaster, New Hampshire, U.S to Merle Colby Allin, Sr. and Arleta Gunther. They had no access to water nor electricity in the log cabin they lived in. Many believe that his atrocious acts were due to his troubled childhood and mentally unstable father, others suspect that he suffered from personality disorders. Nevertheless, Allin had managed to attract a large number of audience for his musical performances. His songs were comically over-the-top hell raisers in the form of spoken word style and traditional style rock.  The lyrics are all about substance abuse, casual violence, and sexual conduct. He lost his life at the young age of 36 to heroin abuse.