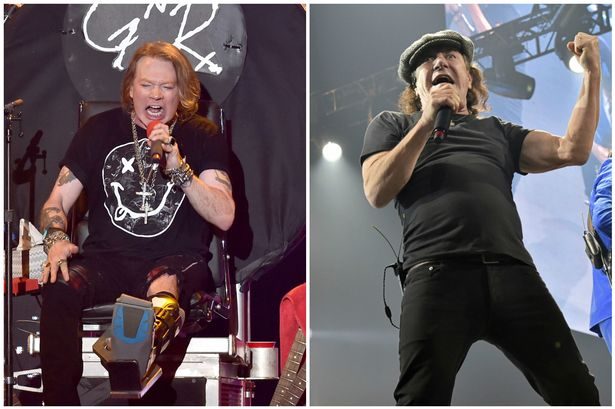 Recently a Canadian journalist named Steve Newton reported that AC/DC is working on a new studio album with Axl Rose as the singer. He also said Phil Rudd is back to work for the said new album, but the thing here is it’s not exactly true.

Brian Johnson and Phil Rudd were captured via photograph outside the Warehouse Studios in Vancouver owned by Bryan Adams where they recorded their last three studio albums.

So meaning, Axl Rose is probably out of the picture for AC/DC’s next album.

But the thing with AC/DC, there’s never been a more certain time where they manage to make a stable line-up since the recording of “Rock or Bust” in 2014.

Well, as a long time hard rocking fan of AC/DC, I’m certainly very happy to see Brian Johnson back in the AC/DC (assuming of course, if the reports were true). Nonetheless, whatever they are trying to come up this time, it won’t be different from their last three records of course, but it will surely rock as hard because it’s AC/DC! Yeah, I know AC/DC at this point in their career is very much seasoned but they will never disappoint.

This is probably going to be a gas, the three getting back together (Angus, Brian, and Phil), Malcolm would be very happy as well. And thankfully Axl will be out of the picture and he can focus more working for a new GnR album as well.

What do you think? Is this a good thing or not?