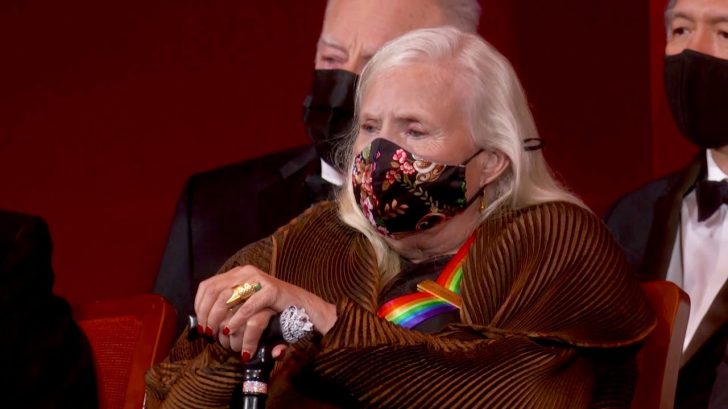 Joni Mitchell made her first public performance in nine years this weekend, taking the stage at MusiCares’ Person Of The Year benefit.

The event, which took place last Friday (01) at the MGM Grand Marquee Ballroom in Las Vegas, honored Mitchell with this year’s titular honor. She joins the likes of Aerosmith, Elton John, Sting, and James Taylor, among other music icons.

The 78-year-old singer was not announced to perform at the event, but joined Beck, Brandi Carlile, Cyndi Lauper, Stephen Stills, Jon Batiste, and more to sing her 1970s classics “Big Yellow Taxi” and “The Circle”. Game”.

The performance marked her first time singing in public since June 2013, when she performed two short, improvised sets at events being held in her honor, where she was initially reserved for reciting poetry. The information is from the NME, which points out that the last show took place in 2002.

The evening marked a rare public appearance for Mitchell, who in 2015 suffered a brain aneurysm that left her temporarily unable to speak and whose aftermath required extensive physical therapy. Later, NME told Mitchell was “making good progress.”

But on Friday (April 1) she was blooming, telling reporters she had artistic “ideas” even as she remains focused on improving her health.

When asked by journalists about her health, she replied that “pretty good” and that she had “improved”.

In 2010, Mitchell revealed to the LA Times that she has a “weird, incurable disease that seems like it’s from outer space, but my health’s the best it’s been in a while. Two nights ago, I went out for the first time since Dec. 23: I don’t look so bad under incandescent light, but I look scary under daylight.”

Mitchell described her condition: “Fibers in a variety of colors protrude out of my skin like mushrooms after a rainstorm: they cannot be forensically identified as animal, vegetable or mineral. Morgellons is a slow, unpredictable killer — a terrorist disease: it will blow up one of your organs, leaving you in bed for a year.

“But I have a tremendous will to live: I’ve been through another pandemic — I’m a polio survivor, so I know how conservative the medical body can be.”

The influential artist who inspired so many from Neil Diamond to Prince is perhaps best known for her 1971 album “Blue,” a deep dive into heartbreak.