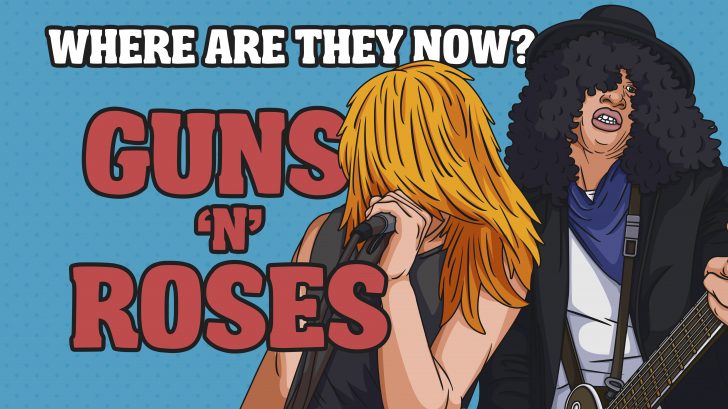 The Most Dangerous Rock Band On The Planet

They used to trash hotels and such. They used to be rash and street smart. They were very dangerous and unpredictable. None of these which I speak of are exaggerations. We all remember their hey day. We were all there witnessing everything. Guns N’ Roses were absolutely DANGEROUS but none the less one of our favorite rock bands out there. They know what they were doing, made some awesome music, and some were rock anthems.

But did you know that the usual lineup we know is not the actual lineup when they first form the band, the band’s name was the result of being comprised of members of two L.A. bands: “Hollywood Rose” with singer Axl Rose and rhythm guitarist Izzy Stradlin and “L.A. Guns” with lead guitarist Tracii Guns, bassist Ole Beich, and drummer Rob Gardner. But it didn’t take long that the members of L.A. Guns were forced to leave the band, forced out by Rose. Duff McKagan replaced Beich, Slash replaced Guns, and Steven Adler replaced Gardner.

So Where Are The Guns N’ Roses Now?

Axl Rose, Slash, Duff McKagan, got back together since they broke up for almost or about two decades.

Izzy Stradlin didn’t join the reunion and the safest way to say this is because he couldn’t come to an agreement with the rest of the group.

While Steven Adler managed to rejoin Gn’R at several shows on the band’s “Not In This Lifetime” tour, playing drums on the classics “Out Ta Get Me” and “My Michelle”. He is now currently working on his new book called “Steven Adler: The Shit My Friends Remember I Did.”

And Matt Sorum, on the other hand, decided not to tour with Alice Cooper’s supergroup the Hollywood Vampires this year. He’s now focusing on his own projects, which includes Artbit, a platform that receives payment for musicians without it going through middlemen like record labels.