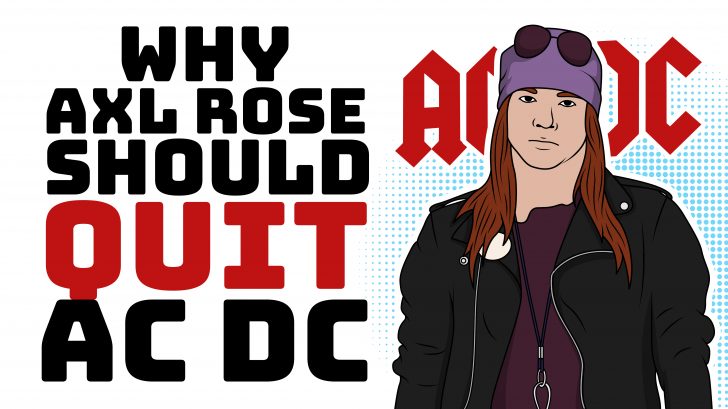 Without Malcolm Young and Brian Johnson, this would become a disaster. Out of respect for the band and its legacy, Angus Young should really take his rest and retire AC/DC once and for all. Without the originals, this would be nothing but an effing start over.

With Axl Rose fronting AC/DC as the new frontman, it’s just a sheer bad taste. It’s outrageous and disgusting. That just is not right. This kind of AC/DC lineup is not AC/DC. It’s just Angus Young and Axl Rose doing AC/DC songs together. Or maybe more like “Angus and Friends.”

Though there is a rumor circulating and we just sure hope so that the rumor is true. – Axl Rose is not a permanent replacement he’s just standing in for Brian Johnson for the remainder of their tour.

Quote from the band:

“We are dedicated to fulfilling the remainder of our touring commitments to everyone that has supported us over the years, and are fortunate that Axl Rose has kindly offered his support to help us fulfill this commitment.”

But given in the state of the band right now, it seems like “for the rest of this tour” and “permanent” are probably synonymous. Surely lot of AC/DC fans were pissed off when they first heard the news that Axl would be replacing Brian Johnson as the new frontman. But, I guess, this will be interesting to see how this plays out. Fulfilling some obligations for the fans, but their fans might not like it. How many will still go to the shows?

Overall, everything about this “Axl joining AC/DC as the new frontman” thingy is a mixed feeling. We all love AC/DC but Axl Rose becoming a replacement, that’s just the worst of the worst. The best reasons for this are because he could act like he owns the band and because his voice could suck, although some people say he’s getting “better.” And for a band that has never let down its fans, it sure sounds interesting and that (keep in mind) it could suck.