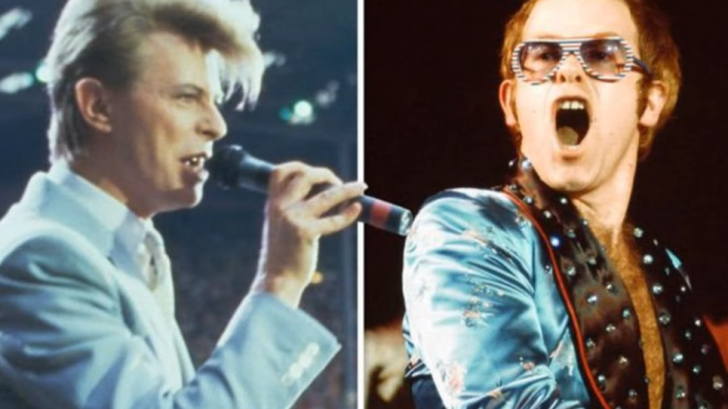 Around the same period, David Bowie and Elton John both had significant stardom; Starman’s song “Space Oddity” peaked at number five on the UK Singles Commercial only one year before the Rocketman released “Your Song,” which also enjoyed comparable chart success.

It didn’t take long for the two musicians to become friends because of their quirky personalities and shared explorations into comparable genres. According to John, “David and I were not the best of friends towards the end. We started out being really good friends.” He went on to provide further details. “We used to hang out together with Marc Bolan, going to gay clubs,” he added, before explaining that they eventually “just drifted apart”.

Bowie made a number of fairly unkind comments about the “Tiny Dancer” vocalist in interviews, which harmed their connection. “Years later, he’d always make snippy remakes about me in interviews,” John said. “‘The token queen of rock and roll’ was the most famous one, although, in fairness, he was absolutely out of his mind on coke when he said it.”

Bowie even mentioned John in a different interview when he said: “I consider myself responsible for a whole new school of pretensions — they know who they are. Don’t you, Elton?”

John clarified: “I honestly don’t know what the problem was, but there clearly was a problem. I was never great friends with Bowie. I loved his music and we socialised a couple of times, visiting the Sombrero with Tony King and having dinner together in Covent Garden while he was rehearing for the Ziggy Stardust tour. But there was always something distant and aloof about him, at least when I was around.”

It’s obvious externally looking in that the two didn’t ultimately get along. Later, in a remark, John stated: “I thought it was a bit snooty. He wasn’t my cup of tea. No; I wasn’t his cup of tea.” The vocalist of “Rocketman” even assumed Bowie saw himself as superior to him.

Despite their animosity over the years, John seemed to put it behind him when Bowie died away in 2016. John commented on the passing of the “Heroes” vocalist as follows: “But the dignified way he handled his death, I mean, thank God. I knew he’d had a heart attack on stage in Berlin years ago, but not about the cancer. Everyone else take note of this: Bowie couldn’t have staged a better death. It was classy.”

You can see a video of John paying tribute to Bowie only three days after the news first broke at a performance in Los Angeles below.