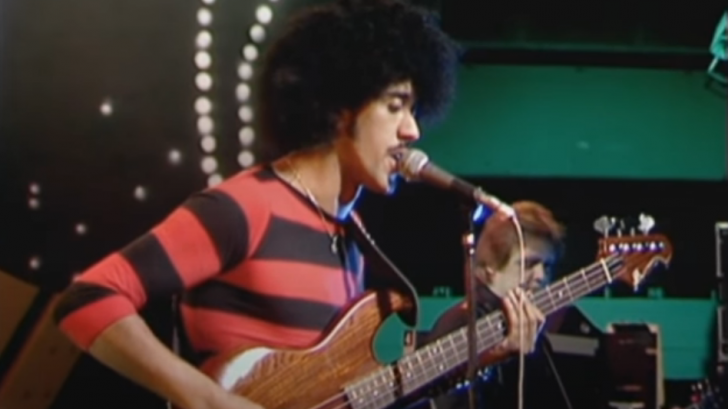 Graeme Thomson is one of the greatest experts in bringing the lives of music stars to paper. After narrating the biographies of names like George Harrison, Kate Bush, Elvis Costello, or Johnny Cash, all of which are highly recommended readings, the British music critic has taken an interest in the life story of Phil Lynott. The result is “Cowboy Song,” the definitive account of one of the most endearing and charismatic figures in rock history.

Lynott, in addition to being one of the most iconic figures in rock, is considered a legend in the world of music for having helped create and give life to a style that represents many musicians today.

Phil Lynott was born in West Bromwich (England) on August 20, 1949. Son of a Guyanese, Cecil Parris, and an Irish, Philomena Lynott, whose last name the artist himself chose. He lived his first years in Manchester to end up moving in 1957 to Crumlin, Dublin, where he lived with his grandparents. His father left them three weeks after Phil was born and went to his native Georgetown. Phil and his father met again in the late seventies, for this reason, the artist adopted his mother’s surname as his own.

The Black Eagles were the first band where he began his walks in the world of music as a vocalist in 1965. They performed versions of popular songs of the time in local clubs in Dublin. At the Christian Brothers School in Crumlin, he met Brian Downey and they quickly became friends. Downey joined Liffey Beats but the group disbanded soon after.

Lynott moved to Clontarf soon after and joined Kama Sutra, where he learned how to interact with the public and develop his skills as a frontman. At the beginning of 1968, he founded Skid Row with Brendan Shiels, but as Downey was not interested in the band, he ended up joining Noel Bridgeman. Skid Row signed a contract with Ted Carroll, who would later become Thin Lizzy’s manager. At the time they had guitarist Bernard Cheevers and Phil didn’t play any instruments so he developed his skills as a vocalist.

Bernard Cheevers left Skid Row to work full-time at the Guinness Store, and it was at this point that Gary Moore took over as guitarist, forging a friendship between Lynott and Moore that would last for many years. Due to a tonsil problem suffered by Lynott, Shiels decided to do without him and looked for a substitute. As a result of this Shiels felt guilty and when Lynott had recovered he offered to teach him to play the bass, to which Lynott agreed by paying him £36 for the bass that Shields sold him and had previously bought from Robert Ballagh.

Thus “Orphanage” was launched with Lynott and Downey writing their first original songs alongside Joe Staunton and Pat Quigley.

At the end of 1969 they met Eric Bell, then the guitarist of The Dreams, and together they formed the first formation of Thin Lizzy, a name that Bell adapted from one of the characters in the comic The Dandy (DC Thomson) where a robot called Tin Lizzie appeared. With this first formation, they recorded their first three studio albums: Thin Lizzy from 1971, Shades Of A Blue Orphanage from 1972, and Vagabonds Of The Western World from 1973. The first two went quite unnoticed at the time but the third enjoyed great popularity thanks to the single “The Rocker” and the version of a popular Irish song “Whiskey In The Jar”, which later popularized Metallica even receiving a Grammy in 2000.

Eric Bell couldn’t stand the pressure of touring, excesses and ended up leaving the band, at which point Scott Gorham and Brian Robertson joined the band to release the fourth studio album Nightlife» which, despite not enjoying great popularity in his moment is cataloged as a cult album today and has one of the most emblematic covers of the band. With this second formation, they recorded four studio albums, the most successful of the band, even releasing two albums in the same year, Jailbreak and Johnny The Fox. At that time the band enjoyed great popularity and their efforts were rewarded. Lynott met Huey Lewis while on tour in which Clover, Lewis’s band, was opening for Thin Lizzy. Huey and Lynott became friends and even Lynott’s performance surprised Lewis so much that he took inspiration from the Irishman on stage.

Bad Reputation (1977) is the band’s first album since 1973 to feature only three members due to the firing of Brian Robertson despite his collaboration on three tracks on the album. They opted for a simple cover where only Gorham, Lynott, and Downey appeared, something that Robertson accepted without a problem. The album enjoyed great reception and they embarked on an extensive tour from which a live album entitled Live And Dangerous (1978) was recorded.

In 1979 they had Gary Moore for the recording and subsequent presentation tour of Black Rose: A Rock Legend (1979), one of the band’s best albums. Moore and Lynott maintained contact from the moment they met and due to their friendship, Lynott would later participate in some of Gary Moore’s solo albums, even composing some of them.

Moore returned to focus on his projects and Snowy White joined Thin Lizzy, with whom he recorded Chinatown (1980) and Renegade (1981), considered the weakest records of the group.

In the late seventies Lynott became interested in other projects, Lynott began to meet members of punk bands, including the Sex Pistols and The Damned, who were then on the rise and went on to form a band called “The Greedies” with members of the aforementioned bands where they performed Thin Lizzy and Sex Pistols songs live. They even recorded a Christmas song called “A Merry Jingle” with members of Lizzy and Pistols. Despite the incorporation of Snowy White into the ranks of Thin Lizzy, Lynott launched his solo career in 1980 with his first studio album Solo In Soho (1980) which included a song dedicated to Elvis entitled “King’s Call” and in which had the collaboration of Mark Knopfler (Dire Straits).

Later he released his second solo album “The Philip Lynott Album” where he explored other musical genres and did not enjoy the expected success except for the single “Old Town” that was used as the header of the highly popular program “The Top Of The Pops”.

In 1983 the last studio album of the band «Thunder & Lightning» is released and it features the addition of John Sykes on guitar, from the NWOBHM band Tygers Of Pan Tang, which provided a harder and heavier sound to the band. the band. The success of the album only increased the need to dissolve the band, so a farewell tour was made and Thin Lizzy’s career ended with the release of their latest live album «Live Life«, a live show at the that all the members who had passed through the band participated.

He later made sporadic appearances on Gary Moore tracks such as Parisienne Walkways and Out In The Fields, recorded a solo rock n’ roll medley, and founded Grand Slam in 1984 with Doish Nagle, Laurence Archer, Robbie Brennan, and Mark Stanway who came to record several demos and original songs that were released a few years ago as a compilation.

Lynott spent the last months of 1985 consuming large doses of alcohol and heroin, an addiction to which he succumbed a few years earlier and which worsened over the months. His mother discovered Lynott unconscious on December 25 at home and alerted his wife Caroline, with whom he had two daughters, Sarah and Cathleen. He had overdosed on heroin and was subsequently admitted to the hospital. He was taken to a drug clinic soon after and was diagnosed with sepsis. He finally died on January 4, 1986, from pneumonia that was complicated by heart failure and ended his life at the age of 36.

In 2005 a bronze statue was built in the city of Dublin in his honor.