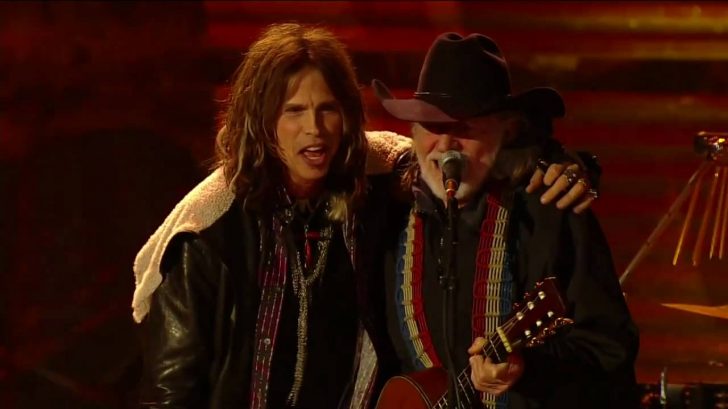 To celebrate Nelson’s 70th birthday (2003), Columbia had put together two full CDs from over forty years and nine different labels, and spiced it up with a bonus track: an unpublished duet with Steven Tyler from Aerosmith.

This collection begins with Nelson’s 1961 recording of “Night Life” and concludes with the unreleased track “One Time Too Many.” Throughout 41 songs, Nelson shows off his art as a singer, songwriter, guitarist, and performer. He is a true musical icon.

In the video below, you’re going to love the performance especially if you’re a huge Willie fan. You’re going to be amazed by the many artists he performs and records with, especially those considered outside of his genre. Steven Tyler could be a country singer!

The song starts off as a slow country blues number, then morphs into a blues-rock. Steven Tyler really shines here too.

The live duet performance of Willie Nelson and Steven Tyler happened during the Farm Aid 25: Growing Hope for America were both performs “One Time Too Many” and “Once is Enough” at Miller Park in Milwaukee on October 2, 2010.

Willie Nelson along with Neil Young and John Mellencamp started Farm Aid in 1985 to keep farmers on the land and has achieved this since then making sure everyone has access to healthy food from family farmers.