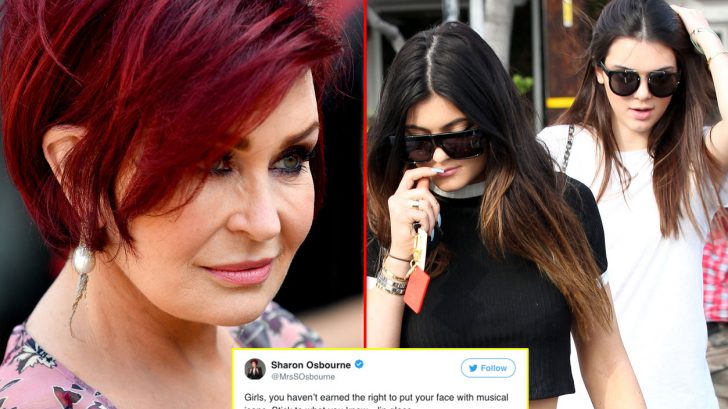 And The Hits Just Keep On Coming…

Kendall and Kylie Jenner may have pulled all offending merchandise from their social media and official website after both The Doors and the estate of hip hop artist Notorious B.I.G. slammed them with brutal cease-and-desist orders last year, but that didn’t stop the flow of people taking them to task!

Along with Led Zeppelin, Kiss, Pink Floyd and various hip-hop artists, Ozzy Osbourne found himself wrapped up in the controversy as well after one of his t-shirts was imprinted with an image of Kendall Jenner’s face, prompting a response from his manager and wife of 3 decades Sharon Osbourne; true to form, Mrs. O hit back on social media with a photo of the offending t-shirt and in just 7 words put the Jenner girls in their place:

“Stick to what you know…lip gloss.”

Girls, you haven’t earned the right to put your face with musical icons. Stick to what you know…lip gloss. pic.twitter.com/BhmuUVrDBn

Ouch! Not long after, Kendall and Kylie issued identical statements apologizing for their poor judgment and despite offering up high praise for the artists whose work they co-opted for their own benefit, it looks a lot like they’ll be following Sharon’s advice and doing just that: sticking to their budding makeup empires.