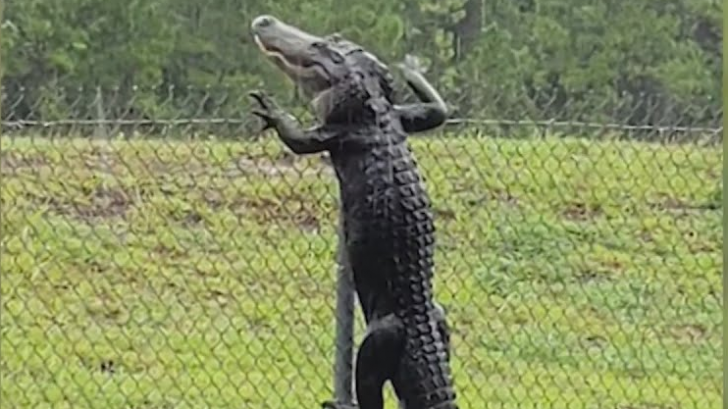 Florida resident Christina Stewart was driving by the Jacksonville Naval Air Station when she saw something scale the fence and enter the facility. When examined more closely, it was found to be a large alligator. Stewart pulled over and started taking video because although gator sightings are common in Florida, it’s incredibly unusual to see one scale a fence like a monkey.

“If you are new to Florida or have been here for years, when you see water, assume an alligator could be in it. We have several on the base and they don’t respect our security measures. On the serious side, always be aware with small children and pets. Golfers be aware and watch where you stick your hands. Do not approach them ever!”

The southeastern United States is home to an estimated 5 million American alligators, 1.25 million of which are found in Florida. The idea that alligators move slowly is a prevalent one. They can travel rather swiftly on land when necessary, but only for brief periods of time until they are quickly weary. Alligator bites are nevertheless severe wounds because of the reptile’s powerful bite and potential for infection. Due of this, all alligator encounters should be treated seriously and with utmost caution.