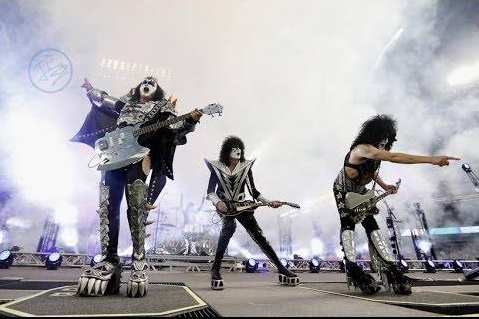 KISS recently announced their “definitive” documentary is under production and are inviting fans to contribute by sending their video clips or photos for potential inclusion.

The documentary is titled, Kisstory, which was also used as the title for the group’s 1995 book and is set to be released in the fall of 2020. The group provided a list of items they were looking for.

“Kiss is set to be the subject of an upcoming feature documentary and wants you to help tell their story,” a statement said. “This will be the definitive documentary of Kiss. But in order to make the film you deserve, the producers are conducting a global hunt for rare and compelling Kiss-related media.”

KISS asking for “never-before-seen footage of the band onstage or offstage during the 1970s, [s]till photographs or video of the band in the ’70s trying to conceal their identity, [u]nscripted, candid or revealing moments between band members, onstage or off, from any era” and “obscure local or international TV/ radio interviews or news reports from the 1970s, ‘80s or ‘90s.” The group also provided details on how to contribute by uploading them, adding: “We want to help the world see the band through your eyes. Don’t miss this chance to become a permanent part of the band’s legacy. Kisstory is literally being made.”

ATTENTION KISS ARMY!KISS is set to be the subject of an upcoming FEATURE DOCUMENTARY and WANTS YOU to help tell their…

Last month saw the release of the band’s earliest-known footage performing live at Coventry in New York City in December 1973. In the footage, Paul Stanley, Gene Simmons, Ace Frehley, and Peter Criss performs “Deuce” and most of “Cold Gin.”