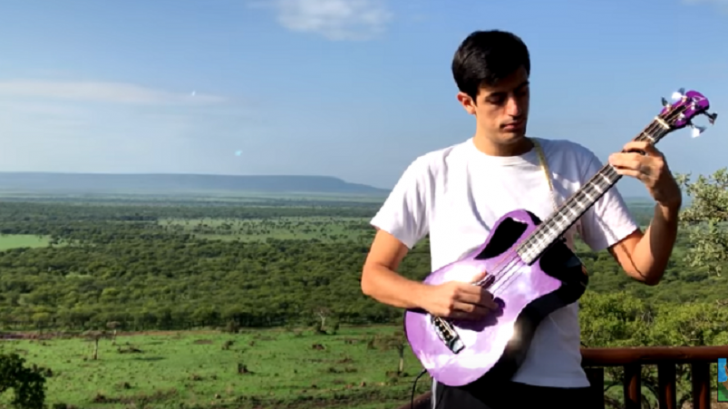 Okay, imagine having enough dedication (and money!) to go to Africa to play Toto’s “Africa” just because some subscribers requested you to. This dude is definitely mad enough to do it. Let that sink in for a bit.

The effort alone deserves applause and it only proves how passionate he is about his craft – he will stop at nothing to keep viewers entertained even if that means travelling halfway around the world just to play his cover version of a classic.

“Yes you guessed it. It’s Toto – Africa, on the bass guitar!

Got thousands of requests for a Toto – Africa video, I decided to do the right thing and actually go to Africa (in Tanzania) at the Seregeti National Park and play the song there.
It was a very hard trip, but I am happy of how the video turned out and I hope you’ll like it too!” – Davie504

So you probably noticed that Toto’s “Africa” was inescapable last year. You see, it all started with a teenage Weezer fan who asked the band to cover this classic. Weezer first released their version of “Rosanna” and then “Africa” – the latter became their first Hot 100 hit in 9 years! It even topped the Billboard Alternative Songs chart.

We basically heard it all in 2018 – rapper Pitbull performed his take on this timeless tune and there’s even a cover where the song is played on sweet potatoes and a squash (we’re not kidding, promise).

“A lot of people categorize us as ‘that ‘Africa’ or ‘Rosanna’ band,’ and I hate that s–t. We have a lot more substance than that. Don’t get me wrong – those songs have been great to us, but you really don’t understand the depth of the band if that’s all you know.” – Toto’s Steve Lukather

Enjoy this performance because there’s really nothing quite like it…