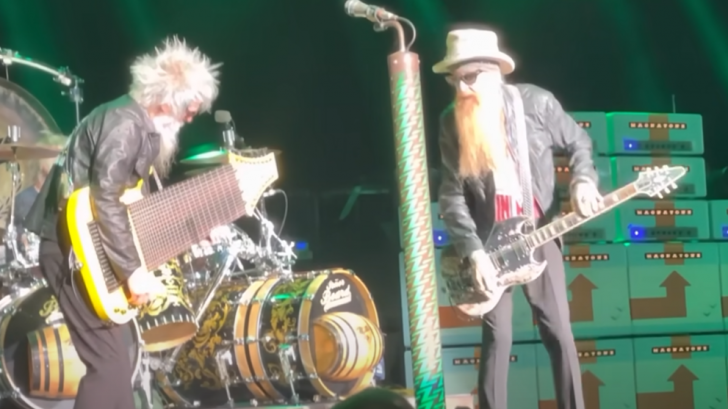 Elwood Francis, a member of ZZ Top, talked about his attention-grabbing 17-string bass on social media over the weekend.

He debuted the gigantic behemoth during his Nov. 5 concert in Huntsville, Ala., utilizing it for set opener “Got Me Under Pressure.” Although many audiences merely laughed off the hilarious instrument, others saw similarities between Francis’ 17-string bass and YouTuber and musician Jared Dines’ homemade 18-string Ormsby guitar.

“I can’t with this … when ZZ Top uses a ripoff version of my 18-string guitar from some website. It even has ‘JD’ on the 12th fret LOL.”

After Dusty Hill’s passing in July 2021, Francis, who succeeded him, addressed the “controversy” in an Instagram post of his own.

“Well now … I thought I’d use this bass once or twice for no other reason than amusement,” he wrote. “It’s such a strikingly absurd instrument. We’d all laugh and then move on to something else. However, it’s gotten too much attention to not talk about the guy that actually came up with the idea: Jared Dines.

“The bass I play is a Chinese made POS. It’s a mid copy of something he plays and he’s probably all pissed off,” Francis added. “I don’t know if he designed it, but the cat’s an amazing musician and sees me playing simple-ass bass lines that I could play with one string, while he has worked up music to make use of the damn thing. Dude has moved beyond the 17 string and I’d suggest checking him out just to see what he does with it.

“I just hope he has a sense of humor,” Francis stated.

Fortunately, Dines does seem to have a quick wit. Not angry at all, he wrote in response to Francis’ message.

“I thought the picture of you playing it was photoshopped at first. I love that it’s real! Guitars are modified and remade all the time, I’m glad you had fun with it.”

Dude, I cannot believe you play these things!! We thought it was a joke but then find out about you and watched some videos. Bravo motherfucker! The joke’s on me ’cause I have to play that bootleg piece of shit.”

Francis gave the following background on his new instrument:

“I was doing night internet searching [and] turned up a picture of this crazy 17-string bass,” he said. “I sent a picture to Billy [Gibbons], and we laughed about it and made some jokes about actually trying to use it.

“A few weeks later, after I had forgotten about it, Billy shows up with [the 17-string bass],” Francis proceeded, describing the circumstance as “one of those ‘hold my beer’ moments.”