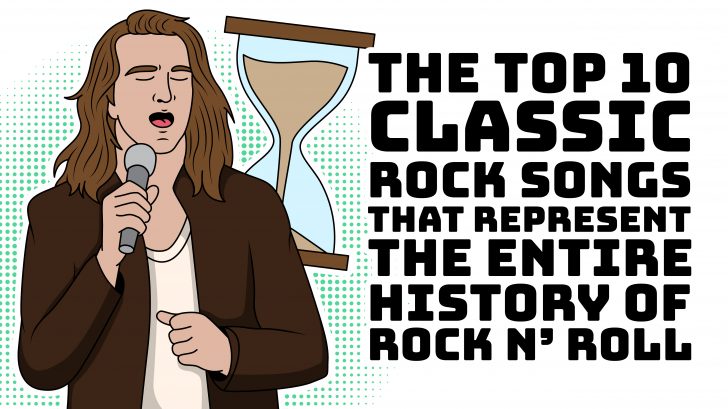 What Would You Choose?

We are not going to talk about the “literal” history of Rock N’ Roll — in this list, we chose the top 10 songs that can “represent” the entire history of rock n’ roll in a sense on how it developed and changed throughout the years. You see, no one person can be credited for the invention of Rock N’ Roll. But its entire history can be defined by songs created by rock n’ roll musicians on different eras. Check them out, and tell us what you think.

There’s no possible way to talk about rock n’ roll without thinking about Robert Johnson. As per today’s standards, Johnson’s playing and singing were not heavy and remotely loud, but the haunting and gritty vibes he provides with his delta blues music influenced numerous Rock musicians to come, counting from the likes of Keith Richards and Mick Jagger to Eric Clapton. So that said, we wouldn’t have the later rock Gods, if it weren’t for Robert Johnson.

Bill Haley & His Comets – Rock Around The Clock

It may sound plain and nice, and not as edgy as it may sound now, but back then this was the 50s rock n’ roll anthem, without including this song this list wouldn’t be complete.

No need for further explaining why this song is included on this list, Elvis voice, and growl sums up everything. One finest rock n’ roll song.

Just like all the aforementioned songs, this was the very first one that started it all, the irresistible groovy riff, the crazy and most energetic guitar playing of all time, and the unique singing — tell me if this is not rock n’ roll, if not, I don’t know what is!

The Beatles – I Want To Hold Your Hand

Keep in mind that we’re not talking about the greatest rock songs of each era. This song has to be in here because this was one of the very first songs set The Beatles, one of the greatest rock n’ roll group of all time into the map, and in return influenced countless rock artist even to this day.

It’s hard to talk about the development of Rock N’ Roll music without including the name of Eric Clapton. This song, a cover of the Freddie King instrumental showcased or even created the very blueprint of the rock sound – the gentle and thick guitar sounds, coupled with Slowhand’s highly bluesy and warm guitar playing, captured the essence of Rock N’ Roll for years to come.

We can all agree that this was one of the very first hard rock songs we ever heard from the 60s. Jimi Hendrix guitar playing says it all, the riffs are distorted and will definitely hit you hard, everything in it is pretty wild – you cannot talk about rock n’ roll music or not even call yourself a rock n’ roll fan without hearing and including in your list Jimi Hendrix.

The Kinks – You Really Got Me

The Rolling Stones – (I Can’t Get No) Satisfaction

Does this need any explanation? – The title itself is already extremely self-explanatory. The 1970s greatest rock n’ roll anthem, as well as summing it all up Led Zeppelin’s importance in Rock N’ Roll, and its influence towards future rock, including heavy metal bands.

We all know this song, and don’t you ever tell that you hate it (just because you don’t like Axl Rose). One of the most celebrated rock songs of all-time, as well as a very important one from the 80s.

This song is very important not only for the Seattle Grunge Movement but for Rock N’ Roll itself. It killed off hair metal in general. Of course, grunge did not last that long, but it deserves to be included in this list because as a song it had helped and changed the course of rock n’ roll history. – Thank You, Kurt Cobain.

These songs represent defining points in rock n’ roll and its development all throughout the decades, as well as, the careers of the artists/bands. Of course, it is easy to fill this list with ten other songs or even more, but these songs will do nicely. What do you think? Do you agree with this list? What songs would you choose to represent the entire history of rock ‘n’ roll?